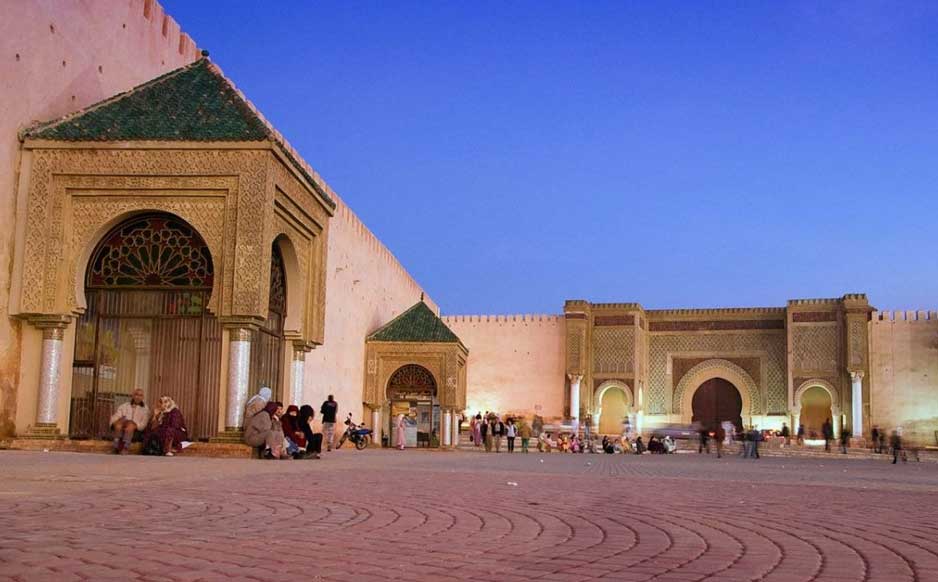 1st Day: From Casablanca via Rabat and Meknes to Fes

The starting point is Casablanca. The last point is Fez. On the way, Rabat and Meknes are in the middle of the way. Prior to check in Fes, the visit includes Meknes and in particular Volubilis. The latter is the place of the Roman ashes left behind by the Roman Empire. The city of Meknes is flourished with monumental sites encasing the Sehrij es-Souani, the gate of Mansour, and Lhdim place as well.  In the evening, the visit ends in Fes.

The program of the second day is as follows. The visit begins with “the old city /Medina in company with a professional guide. The Medina is full of markets selling traditional hand-made goods and other commodities. We are to have a stop at the gate of the Royal Palace, and the Karoine Institution. The visit encompasses the tomb of Moulay Idriss II. Lunch is served at the traditional restaurants in the Medina. The visit continues to get the Najarine Fountain. In return, you cease to rejoice a comprehensive view of Fez.

The program of this day starts with a region known as Imouzzar. It is fcovered with forests. The region is reputed by wildlife, and several kinds of birds. Barbary apes could be seen on over there. The next point is Midelt where lunch is usually eaten. The visit continues alongside mountains.  They overlook Ziz valley. We keep on through the colorful city of Errachidia to get to Merzouga. It is a small town on the widespread outskirts of the black desert. Overnight is in Merzouga.

The breakfast is served at hotel. We are meant to go on a tour along with Erg Chebbi.  We pay a visit to a house and listen to music. The visit reaches deserted mines as well as roaming with Berber nomads. Time about lunch the return to Merzouga is programed. After relaxation time, we get prepared to trek the camels which are awaiting us to go on an adventure. The night is spent in an equipped camp. This is accompanied by the drum music in the middle of the desert. When we reach the camp, a high dune is climbed to see the sunset. We figuratively spend the starry night in hotel riddled with million of stars. It is an Amazigh.

5th Day: From Merzouga via Todra Gorges to Dades Valley

The return on camels to Merzouga is beginning to happen in the morning. Arriving at hotel and having breakfast and a shower in the hotel are done respectively, the journey to Dades valley starts. Passing by Rissani comes after Erfoud district, a famous town known for its dates. Later, the visit heads on to Tinejdad, Todra gorges till Dades valley.

Dades Valley after breakfast is the starting point in the sixth day. We drive in the direction of Ouarzazate. The city is touted as the Moroccan Hollywood. The viist includes in the schedule Cinematographic museum. Afterwards, the UNESCO protected site of Ait Benhaddou is the next point. It is considered the greatest kasbah and well-built fortress in Morocco. The castle of Ait Benhaddou is exciting touristic place. The visit includes the High Atlas Mountain crossing via the pass of Tichka. It is about 2260m high. Over this pass, the panoramic views of the mountains closer villages are worthy of appreciation and preservation. Marrakech in the evening is arrived.

Your own customized or planned tour of Marrakech can begin with a visit to the stunningly beautiful Ben Youssef Medersa. You then take a walk through the old medina and labyrinth of markets. This maze of colorful alleys and small squares is home to a confusing number of stalls and ateliers specified to specific crafts. Finally, you find yourself in the famous Djemaa el Fna, the city’s main square. Just opposite the square you find the Koutubia Mosque. Other highlights will include the Saddian Tombs and the Bahia Palace, with its green courtyards, incredible painted woodwork ceilings and exquisite gypsum zellij carvings. Tonight, you’ll dine at Palais Souleiman, where you can also enjoy listening to Andalus and Gnawa music.

Marrakech is left in the morning. Morocco Trip Sahara goes through the Moroccan Imperial Cities till Casablanca. The airport is a site of flashbacks of all moments spent together. 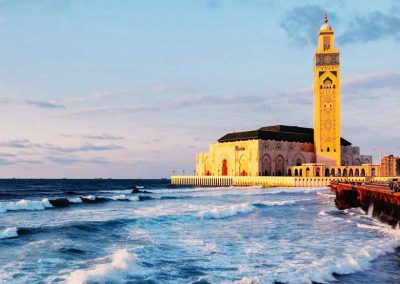 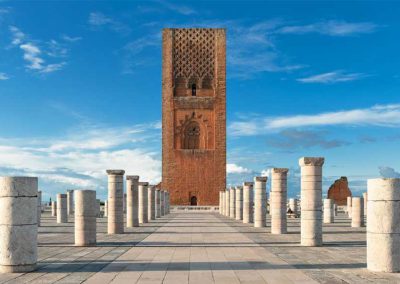 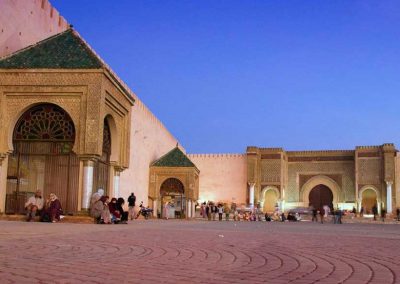 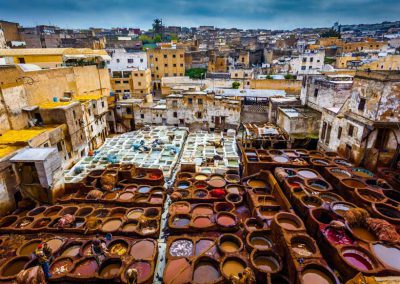 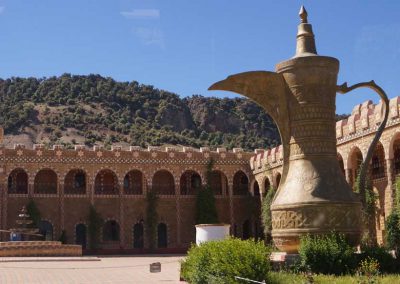 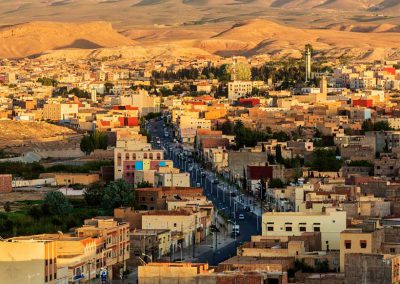 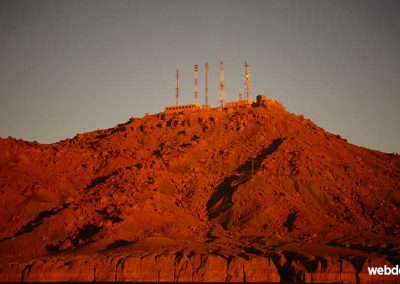 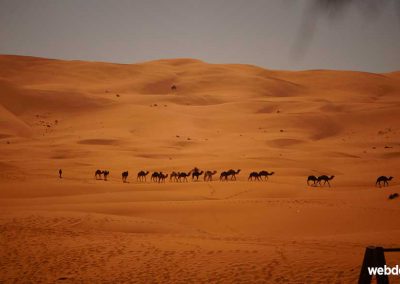 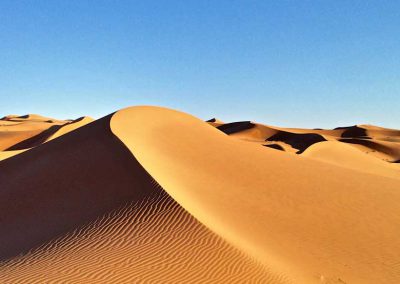 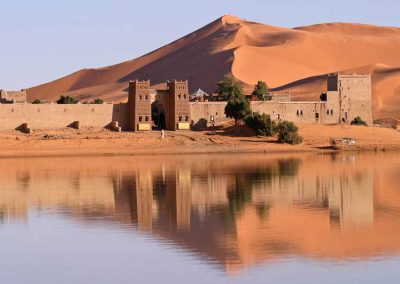 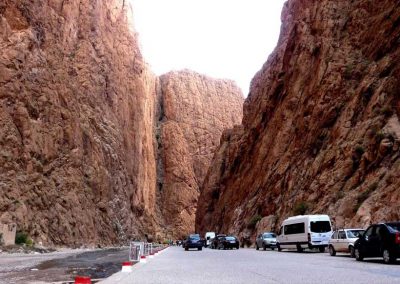 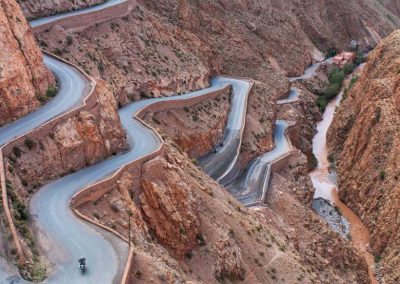 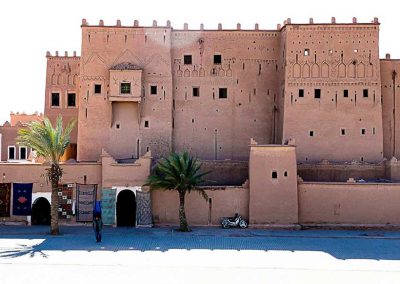 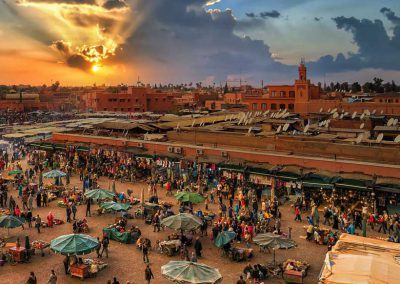